Jared Bark, one of four partners at Bark Frameworks in New York, remembers walking up to a beautifully framed Matisse drawing in a San Francisco gallery. His delight soon turned to dismay when he discovered that its silk matting was not archival quality—meaning that it would not harm the work—and its thick pulp mat board was covered with white tape not unlike masking tape in quality. “The framing had everything wrong with it, but the piece looked great and distinguished,” Bark recalls. “The materials were all second–rate. The piece, over time, was going to burn up.”

Just as a rich dessert may look luscious but be bad for your health, so an attractive–looking frame and its components—glazing, mat board, backing, hinging—can be harmful to your art. In fact, they may be full of substances that can destroy the work over time. Archival–quality framing, while enhancing the look of a piece, can also contribute to its longevity. 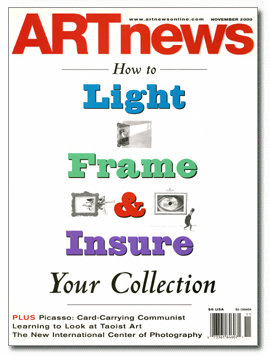 However, as Hugh Fibbs, a Washington, D.C.–based preservation expert and lecturer, notes, “The decision to frame requires an understanding that it will change most things imperceptibly and some things significantly.” In other words, displaying your art hastens its demise, regardless of how many precautions you take.

That said, not all materials exhibit the same sensitivity. Works on paper are especially susceptible to damage, with photographs, particularly those printed in color, the most vulnerable. Among color photographs, those treated with a conventional resin coating are the least stable. “Watercolors are also very vulnerable, as are pastels,” Bark explains. “Colors such as madders, lakes, Van Dyck brown, gamboges we call fugitive because of their penchant to change in light.” Winslow Homer’s palette, for example, included lavenders, pinks, and fuchsias that are now mostly faded.

Most important, conservators say, is to block out damaging ultraviolet rays by placing specially treated UV–blocking glass or acrylic over the front of an image. The most sophisticated glazing currently available consists of laminated glass with a plastic UV–blocking core. If broken, the glass holds together like a windshield and won’t cut or stab the picture. It’s nonreflective and low in iron, so it has virtually no green tint. “This product first attracted attention during the Vermeer show in Washington,” says Bark. “People noticed that they didn’t notice it.”

What’s behind the picture also counts. Mat board limits the work’s exposure to oxidizing and acid–producing gases and keeps sharp objects from puncturing it. The board should be made from 100 percent cotton fiber, often called rag board, which is naturally acid–free. Board made from chemically purified wood pulp treated with acid–neutralizing calcium carbonate rates one notch below cotton, says Bark, because there’s always the chance, albeit slim, that the treatment may have been incomplete. Plain pulp board coated with calcium carbonate will eventually degrade and overwhelm its alkaline reserve. No framer should be using ordinary brown corrugated cardboard in the back of a frame for any reason, because it’s full of acid.

Hinging—the way a work is attached to its backing—is a subtle but critical part of the process. It should be possible to remove it with no or minimal damage to the art. Generally, Japanese paper hinges are the best. Vegetable paste made from rice or wheat starch should be used to attach the hinges. The use of these products requires considerable technical skill, so it is advisable to ask your framer if it is a part of his or her regular practice.

From a conservation standpoint, other hinging options pose considerably greater risks. Pressure–sensitive tapes or adhesives should rarely be used in framing because they’re hard to remove and may contain acid. Linen tape might be a better alternative, but it is still not an archival–quality product.

Other presentation options include corner pockets and overmatting, which covers the edges of a piece like a window. However, if you overmat a work and the exposed paper changes color after being exposed to light, you will never be able to display the entire sheet again. Overmatting does have the advantage, however, of supporting the whole sheet.

Because techniques and materials have improved over the last 20 years, experts advise that art framed before 1980—especially works on paper—be opened and examined. More recently framed images might need updating, depending on the vulnerability of the work, who did the framing, and how it looks from the outside. “Framing began to improve in the ’70s,” says Fibbs. “Anything prior to 1980, you can pretty much predict, will have something wrong.” “We learned a lot in the last 20 years,” agrees Jakob Guttman, an antique–frame dealer and antique–reproduction manufacturer in New York.

While the 18th century may have been the richest in frame design, framing choices have expanded tremendously over the past 30 years. When making a selection, both historical and formal considerations should be taken into account. “The frame is there to present the work in the most effective way possible,” says Bark. “That doesn’t mean the frame should be invisible and utterly mute. It can have its own resonance that engages the work. There can be a dialogue.”

The size of the frame should also be considered, in light of those of other pieces hung nearby and the surrounding decor. In any case, “you don’t want the work to be subordinated by the frame,” says Bark.

Craig Ponzio, owner and chief designer at Larson Juhl, the world’s largest designer, manufacturer, and distributor of frames, generally doesn’t believe that the frame should interact with the art. “A dialogue with the surroundings is much more important,” he says. Recently, Ponzio has noticed an increasing predilection among framers and collectors for higher quality frames and wide mat board in neutral colors. “People want to be focused on the artwork itself,” he says. “These developments allow for an even better transition between the room and the art.”

If you’re looking for an antique frame, you might pay a visit to Manhattan’s Upper East Side. Two of the oldest and largest antique–frame dealers and antique–reproduction manufacturers in the country—Guttman and Julius Lowy Frames and Restoring—are only blocks away from each other.

Larry Shar at Lowy believes that it’s often important to frame a picture in a historically accurate frame. “With 18th–century French painting, for example, there’s a certain esthetic,” he says. “The opulence of the time, the king, and the interiors were all reflected in the frames.” Lowy stocks more than 4,000 frames, ranging from rare 16th–century Renaissance examples through 20th–century Arts and Crafts models. Prices range from $2,500 to $250,000.

The walls of Guttman’s carriage–house showroom and workshop are covered with frames, some nestled inside each other in huge assemblages. Many antique frames, he explains, become available in times of war and political unrest. “People take paintings, sometimes cutting them right out of their frames. Sometimes the pictures are destroyed and the frames are left,” he explains. Style changes also account for the availability of some frames. Guttman recalls that people didn’t like black Dutch frames, which are now highly coveted, back in the 1930s. “They were throwing them out the window,” he says.

How to choose a framer? Fibbs says that the best will be adept in difficult techniques and offer different options for securing an object. Materials should be of the highest quality, and every artwork should receive the same treatment. “No less attention should be paid to a Horace Wagner than a da Vinci,” Fibbs insists. Bruce Gherman, the publisher of Picture Framingmagazine, says that individuals with Certified Professional Framer (CPF) accreditation can be more reputable, but that collectors should ask about support materials in the frame. “If they say they’re using tape, get out of there,” he advises.

Finally, collectors should remember that even the best framing exposes art to damaging photons. Fibbs recommends a Japanese approach to hanging art: seasonal wall changes, keeping very delicate work in storage boxes, and taking it out occasionally to enjoy. “The cat is the only one who sees it all day anyway,” he says. “Things only have a certain amount of time in the light.”

He sadly recalls a drawing by Jean Cocteau in highly fugitive pink Magic Marker that someone brought in to be framed in the late 1970s. “I begged her not to frame it,” he says, but the collector insisted. “I’m sure it’s gone by now.”