“The keen-eyed may note a Met obsession with framing.”

“The keen-eyed may note a Met obsession with framing.”

The Metropolitan Museum of Art has reinstalled the European paintings galleries. It’s been over forty years since the last reinstallation.

The reframing of some of the pictures is one of the noteworthy changes that Holland Cotter emphasizes in his NYT Friday, May 24th article. In fact, the lead image shows a Frans Hals portrait in its new 17th c. ebony frame, with its previous surround, a carved and gilded French frame, leaning empty against the wall.  There have been many changes in the galleries and among them, Cotter observes, “The keen-eyed may note a Met obsession with framing.”  And an unspoken acknowledgment of the importance of the frame can be seen in the Times piece. Of the seven photographs of individual works accompanying the article, all but one show the picture in its frame.  Only Vermeer’s “A Maid Asleep” is reproduced shorn of its frame—and the work is strikingly diminished without it.

That a photo of the re-framing of a Dutch 17th picture leads off the article is especially apt, since from the end of the 19th century the fashion for re-framing Dutch paintings in carved and gilded, usually French, frames was well established, but these ornate borders are now often seen as doing a disservice to the pictures they frame. At Amsterdam’s Rijksmuseum over the past thirty years a number of works have been freed from the carved and gilded frames which had replaced their original straight-sided, usually ebony framings.

A remarkable example from the Rijksmuseum is shown below, reproduced from “Framing in the Golden Age” by P.J.J. van Thiel and C.J. de Bruyn Kops. Here at the left is Rembrandt’s Portrait of the Remonstrant Preacher Johannes Wienbogaert in a gilded 17th c. Italian frame.  “The Knoedler label on the back suggests the framing took place in 1856….The sitter was fairly overwhelmed by all the gold….An ebony flat frame with large ogee seemed more consonant with the sober dignity of the portrait.” 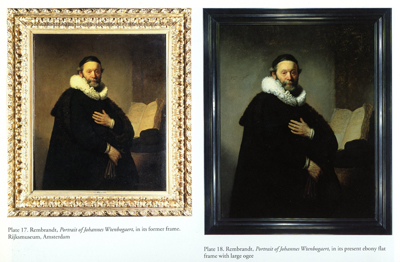 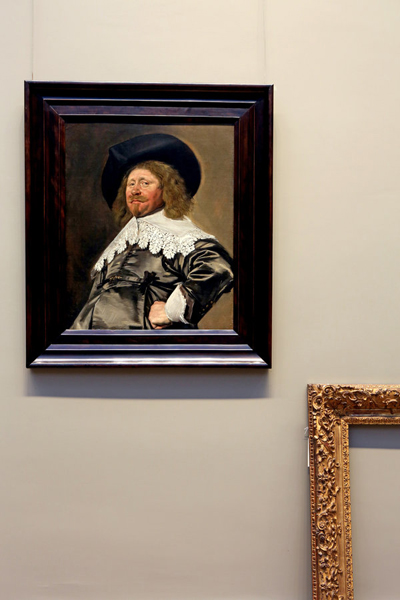