Frames carry multiple messages. Around a work of art a frame can establish an emphatic border—the artwork is inside the frame/the world is outside; or it may act as an almost invisible bridge from the artwork to the wall and the room. The frame may have more to do with the décor surrounding it than the work of art within it; or a frame may serve as an ornate halo, bestowing honor or status on the work framed.

Frames appear in many forms in the media, especially in ads.  If we look closely at these frames and consider their style and type, whether rich or austere, bold or delicate, we can learn something about how we are intended to perceive and understand the object within the frame and its context.

The point of these blogs is to call attention to all the things a frame can alter, affect and mean. 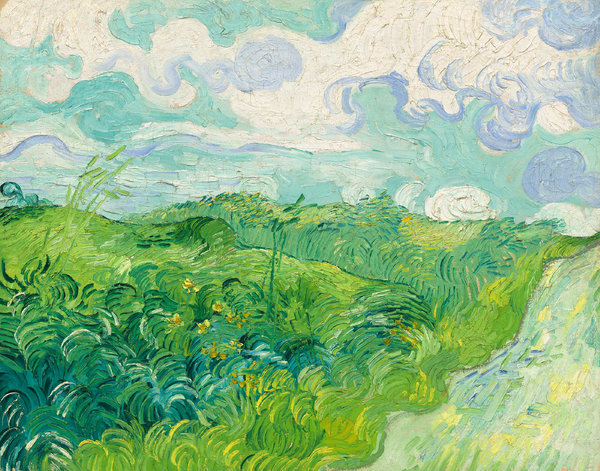 Philanthropist Rachel Lambert Mellon recently decided to bequeath van Gogh’s “Green Wheatfields, Auvers,” painted at St.-Rémy in 1890, to the National Gallery in Washington, DC. The Mellons bought the work from a dealer in 1955. Since then, it has hung in their living room, above the fireplace (presumably no fires ever burned there)…unframed. This is extraordinary – virtually all private owners of van Gogh’s works, as well as galleries and museums, feel compelled to dress them up in baroque or rococo frames; Louis XV frames are the most often chosen for the late works. To leave a van Gogh unadorned by a richly carved gold frame is such a rare choice that The New York Times took note of it in their Dec. 19 edition.

We recently framed a van Gogh for the Yale University Art Gallery in a manner that was both radical and, later, controversial. Jed Bark wrote about van Gogh’s interest in frames, and our own process of framing “The Night Café” (1888) in a manner consistent with the artist’s practice—the resulting article was published in the 2012/2013 volume of the IFAR Journal.