We were recently asked to re-frame a watercolor whose subject was the Hudson River town of Haverstraw, NY. The picture was painted in 1944, and was most recently framed in the 1960s.

Here is the watercolor in its previous mat and frame, from the 1960s. From a distance it looks fine, but when examined closely, it was clear that the matboard was made from highly acidic wood pulp, as were most mats from that time. We could see that the window mat had burned the edge of the artwork. 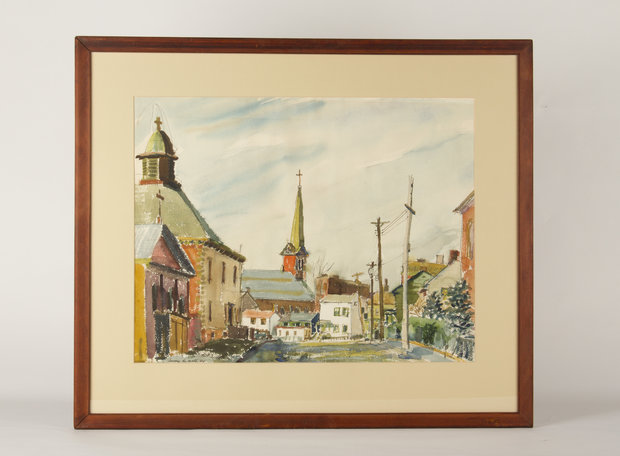 The first step in re-framing this piece was to remove it from its frame with great care. Old wood-pulp mats can be brittle and break up when handled. We were also concerned with the method used to attach the window mat and artwork to the back mat. 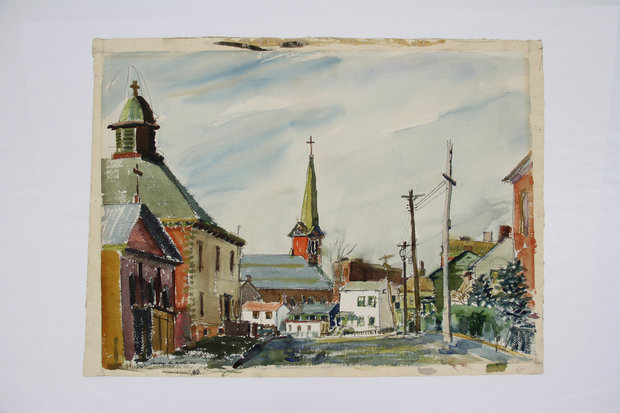 Sometimes the matboards are glued together, or the artwork may be glued directly to the mat. In this case though, the mats were easily separated and we were able to slice the pieces of tape that held the work in place.

The work was damaged by the wood pulp matboards though, especially at the edge of the window mat. Here, where the core of the mat was exposed, acidic off-gassing caused a brown stain, known as mat-burn (see the two images below — the black arrows point to the areas with mat-burn). This staining can be seen at the top border of the work, as well as at its right side. 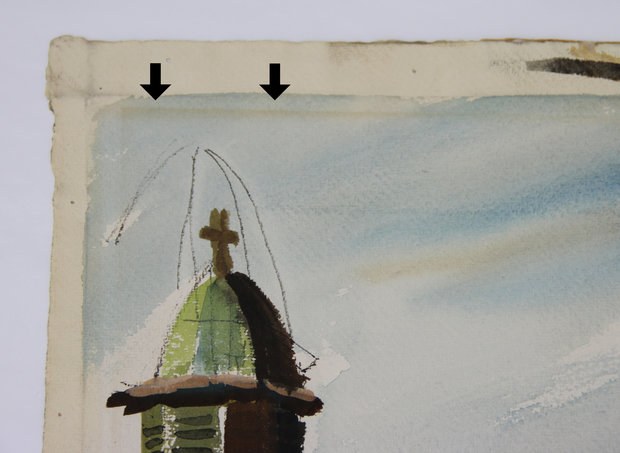 The vertical dark strip at the right side of the watercolor (in the image below) is probably both mat-burn and some vestigial blue pigment, which had been covered by the mat. Since the work had been framed with conventional glass having no added UV protection, the exposed watercolor had been bleached by sunlight over time; its edge was burned by the acidic mat and we can see here that this bit of border that had been shielded from light under the mat seems to have retained its original color. 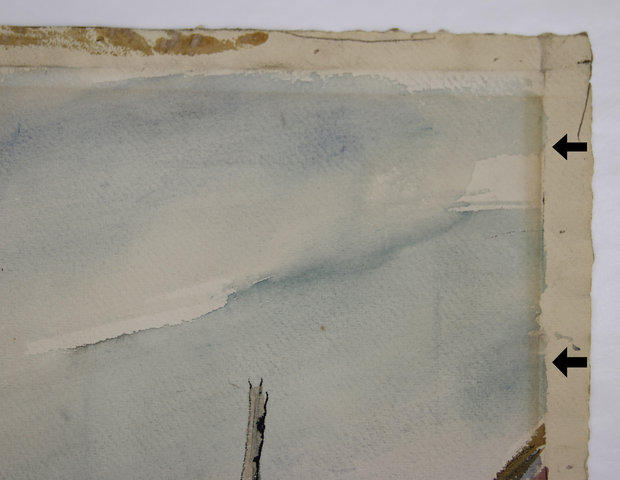 In discussing how to freshly mat the piece in its new frame, we and our client agreed that the new matting should cover most of the mat-burned border, so the opening was a fraction of an inch smaller all around. 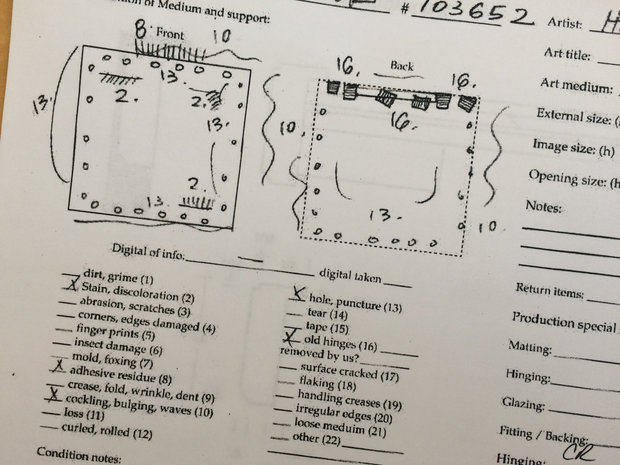 In the image below, the smaller white squares are pressure-sensitive tape from the 1960s framing. We decided that peeling off the tape would have run a serious risk of “skinning” the paper, and our client chose not to send the work to a conservator for removal of the tape, so it was left in place. The very dark spots are old adhesive from an even earlier framing. The four hinges indicated by arrows are those applied at Bark, made by us of water-torn Japanese paper and rice starch paste. 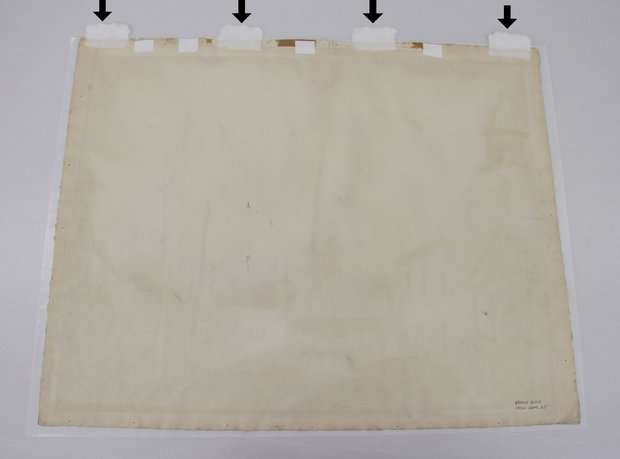 In the image below, rice starch paste is being applied to a hinge (for more on our hinging methods, visit our “Protecting the Art” section). 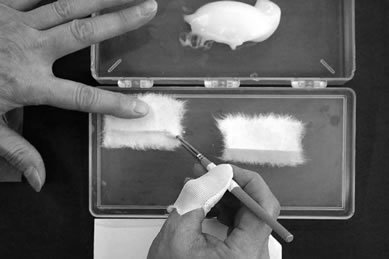 We made the frame for this work from black walnut, stained and waxed. It’s a simple profile with a small step at the outer edge. 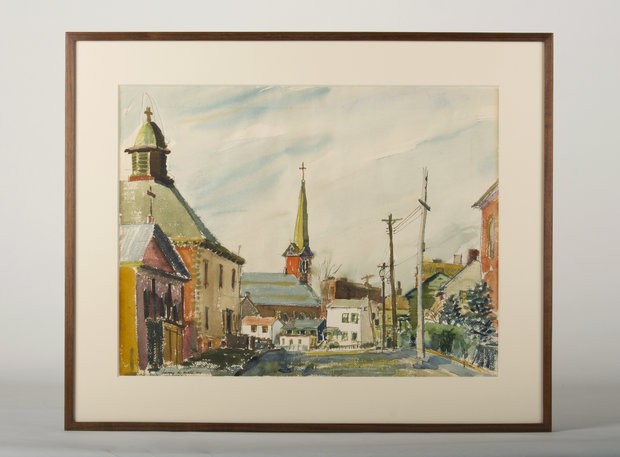 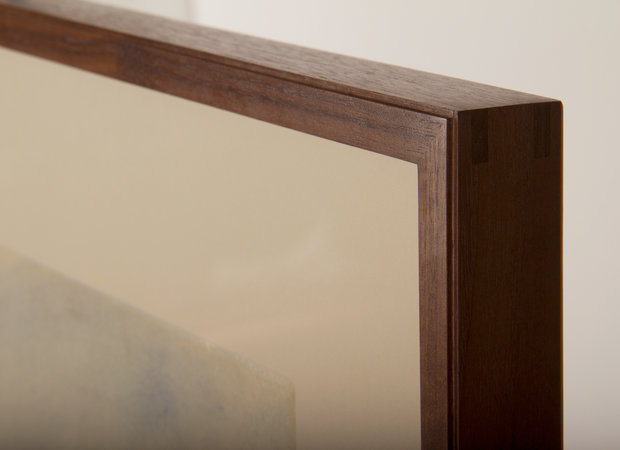 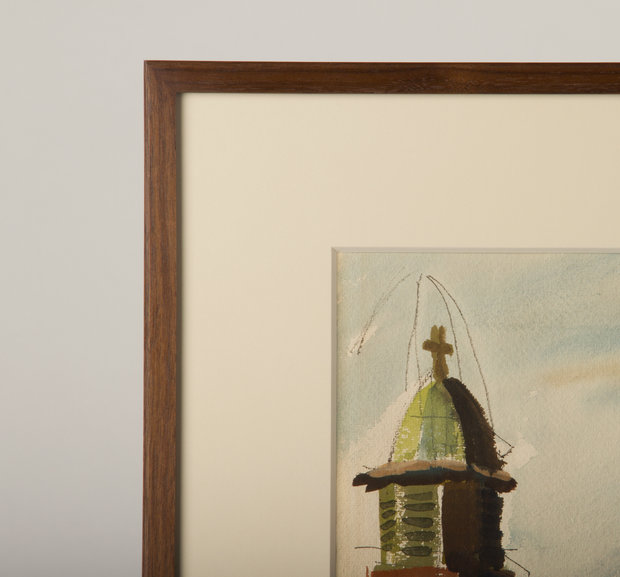 The watercolor in its new Bark frame feels lighter and brighter than before, but the most important changes may not be visible: the matting and hinging of the watercolor are now to the highest preservation standards; and the Optium acrylic glazing protects the watercolor from UV light while suppressing virtually all reflection.